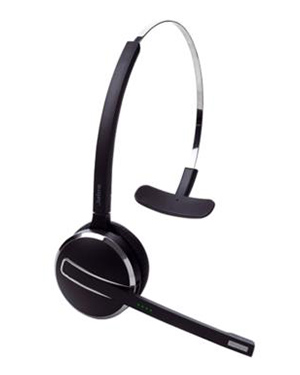 With Jabra PRO 9460 headset, office staff can answer calls made to either of their phones, even while away from their desks. Specially designed for open plan working environments, the model is fitted with a flex boom for optimum voice pick-up. Jabra PRO 9460 is a single-ear headset that can be worn hooked over the ear, or on a head or neckband.

The device is united by a stylish touch screen base. The base connects to your headset via DECT - a technology characterized by its reliable, long range capabilities - offering a wireless range of up to 150m. A SmartSetup wizard on the touch screen helps you connect your phones and choose preferences to get started. Once you're up and running, the screen's colorful icons and intuitive menu system make call-handling a breeze.